Earlier this month, Boeing pushed back its estimate for the Max returning to service to "mid-2020" on account of ongoing efforts to have certified a software update for the deep-seated flight control system thought to be responsible for two fatal crashes involving the aircraft in just five months, and new pilot training requirements.

Lion Air flight 610 crashed shortly after taking off from Jakarta in October 2018, killing all 189 people onboard. Five months later, Ethiopian Airlines flight 302 came down en route to Nairobi. All 157 people onboard died.

Commercial aircraft deliveries, meanwhile, more than halved last year from 806 in 2018 to 380 in 2019. Boeing announced in December it would halt production of the 737 Max in the new year. It currently has more than 400 Maxs awaiting delivery, more than double the number that had actually entered service before the aircraft was grounded.

Boeing will also cut production of its highly profitable 787 Dreamliner aircraft from 14 a month to 12 later this year, and then to 10 early next year. It plans to restore monthly production to 12 in 2023. 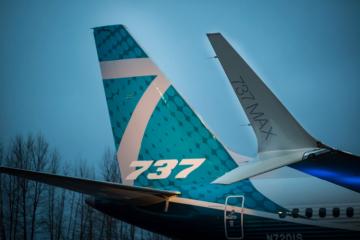