Hello everyone, my dears 👻 I am in Moscow, but India does not let me go yet. the Topic of today's post is not chosen by chance!🐘 ⠀ Have you noticed how common the elephant motif is in Indian works of art? This is typical not only for the cultural context of the country, but also for the political context. ⠀ The Kerala coat of arms, for example, shows two dancing elephants. Festivals are often held here in their honor --- they are brought in decorated trucks from different villages.Every self-respecting village has its own elephant mascot, which is carefully cared for, and on holidays painted with colors and dressed up in bright blankets. They say that the groom to his bride must necessarily come on an elephant .A real celebration for the locals! ⠀ The image of the elephant permeates all Indian culture: religion, history, natural history, folklore, and everyday life. This started more than 4,000 years ago when these animals were first trained. It is important to understand that the elephant is not a domesticated species, such as a cat, dog, horse, or cow. ⠀ Domesticated animals include only those that are well subject to man and reproduce freely in captivity 🔥 ⠀ For several millennia, elephants have been obeying the will of man and doing all sorts of work for him, but they hardly breed in captivity. Therefore, people constantly catch wild animals and then train them! ⠀ At various times, the elephants of India served in the armies, performed hard work, carried great burdens, gave dignity to the officials and functions of the state, and even helped to uproot the very forests on which their lives depended. Gradually, the elephant became a living embodiment of the God Ganesha and an integral part of the festivals of Hindu temples. ⠀ But also, unfortunately, an element of the entertainment industry. Since 1986, the Asian elephant has been listed as an endangered species. ⠀ It is safe to say that the elephant is a pillar of Indian culture and life in General. A magnificent creature! It is difficult to draw an analogy with any animal that is so closely intertwined with our culture. ⠀ Do you have any suggestions, my dears? ✍ ⠀ #chudo_yoga #философияжизни 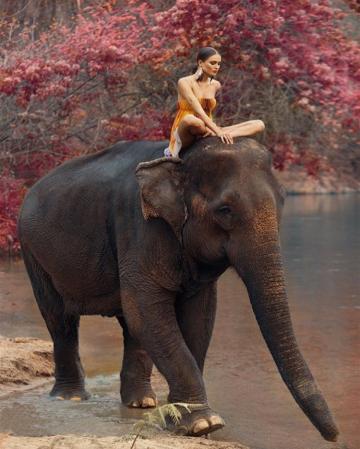