Everyone knows Philadelphia as "The City of Brotherly Love," but for the rest of 2020 it's the sisters getting the spotlight. Philos is Greek for "beloved" and adelphos for "brotherly," but the city is slightly altering this literal translation in celebration of the 100th anniversary of women's suffrage. That's right, for the next year Philadelphia will be known as "The City of Sisterly Love."

Women were officially granted the right to vote on August 18, 1920, thanks to the 19th Amendment, and this year marks the 100th anniversary. To celebrate, Philadelphia City Councilmember Katherine Gilmore Richardson proposed a change to the city's nickname.

According to the resolution passed last Thursday, January 30, by the city council, "The rights established by the 19th Amendment did not initially extend to women of African American, Asian American, Hispanic American, and Native American heritage due to widespread sexism, enduring inequality, and racism. It wasn't until the passage of the Voting Rights Act of 1965, passed on 6 August, 1965, that black women and other women of color were actually allowed to exercise their right to vote."

To accompany this temporary name change, the Visit Philadelphia tourism authority will work on a new campaign designed to encourage visitors to learn more about women's contributions to the city.

"It's not about excluding anyone," said Richardson, "It's about uplifting women. Because we don't have to put someone down to lift someone up."
More like this: The year women became eligible to vote in each country
What did you think of this article?
Meh
Good
Awesome
Bookmark
Posted In
News Activism
Destinations
Philadelphia, PA, United States 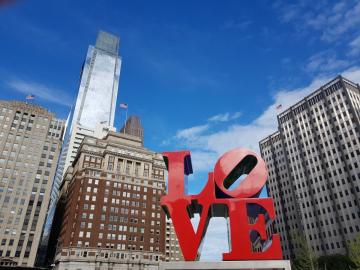