[![](https://instagram.fiev1-1.fna.fbcdn.net/v/t51.2885-15/sh0.08/e35/c0.179.1440.1440a/s640x640/84329867_210737913309086_1881471622551447148_n.jpg?_nc_ht=instagram.fiev1-1.fna.fbcdn.net&_nc_cat=1&_nc_ohc=b_eaocCnByAAX_9gczg&oh=a224be27b79e45e25ca08a85ea239002&oe=5EC4A60A)](https://www.instagram.com/p/B8h7qXTnZI8)
"Tuscia---the region in northern Lazio and southern Tuscany---was the heartland of Etruscan civilization from the eighth to the third century B.C. Later it was a place where rich Romans went when they wanted a break from the city. The houses of numerous noble families are there, many of them still occupied by members of the same families. In the mid-20th century, it became popular with artists, writers, and filmmakers. Yet today, if Tuscia is known at all, it is known merely as the part of the country around the city of Viterbo that you must pass through on the way from Rome to Florence. How fabulous that this leafy bohemian playground full of aristocrats and eccentrics should be so---not neglected, exactly, but so overgrown and unsupervised. Over the past few years, many of its interesting inhabitants have slowly opened their interesting houses as places to stay." At the link in bio, explore Italy's forgotten palazzos---home to counts, princesses, and starry-eyes scholars---and start planning your very own opulent road trip. 📷: @oivindhaug 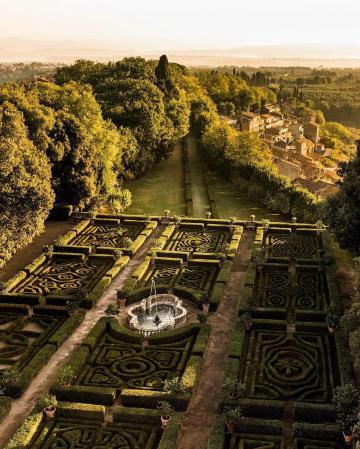