There are ways to make the airport process more pleasant for yourself and fellow travelers.

Airports are not generally known as fun and carefree places. But that doesn't mean you have to add to the unpleasantness.

"Traveling is stressful," Jodi R.R. Smith, president of Mannersmith Etiquette Consulting, told HuffPost. "But if you go into a situation that you know is going to be stressful with a negative attitude, it will only prove to be true."

In the case of airports, sometimes rude behaviors can even slow down the speed and efficiency of the process for everyone, so it's important to be mindful.

To that end, HuffPost asked etiquette experts to identify some rude behaviors they often observe at the airport. Read on for 13 examples.

"If you're able to check your bag curbside, you definitely should because it frees you to move around the airport without having to drag your bags," said Smith. "But you should be prepared to tip those men and women who stand outside in the heat and cold."

She noted that a couple of dollars per bag is standard, but you should tip more if the bags are bigger or heavier.

The process of going through the airport can involve many long lines, so it's important to be respectful of others and do your part to keep things moving as quickly and efficiently as possible.

"Have your ID ready and be prepared to remove your shoes at security," said Diane Gottsman, national etiquette expert, author of "Modern Etiquette for a Better Life" and founder of The Protocol School of Texas.

"Don't be surprised when a kiosk or agent opens up," Smith said, noting that the time spent waiting in line offers the opportunity to get everything ready. "Pay attention to signs and announcements. Look around and see what people in front of you are doing to speed up the process. The idea is to make this as safe and painless for everyone involved. If you're aware of your surroundings, you make the process less painful."

The people who work at airports have to deal with angry and frustrated travelers all day. If you're upset about a flight delay or lost luggage, don't lash out at airport employees. In addition to being rude, that approach may work against your interest.

"When you're mean to the airport workers, that does not incentivize them to want to help you," Smith explained. "If you really are in need of assistance, you want to be as diplomatic as possible. A little bit of good cheer can go a long way. Smile at baggage handlers, ticket agents, TSA workers. Say thank you. They have long, hard shifts, and courtesy is contagious."

"Don't arrive late and then expect everyone to allow you to move to the front of the line," said Gottsman. "Emergencies happen, but when checking in or going through security, give yourself enough time for delays."

When you're finished with a bin, don't leave it on the conveyor belt to create a backlog. This can hold up the security process for others.

"Gather your things, check the bin and put it in the return spot. Some now even have automated ones," said Smith, noting that it doesn't take a lot of effort.

Once you've retrieved your belongings on the other side of the TSA scanner, go to the designated bench or table area to regroup.

"People like to stop right there to put their shoes and belts back on," Smith observed, comparing this to stopping at the top of an escalator. "Go to the benches or vestibule to put things back together. Make it easy for the people behind you." There are many steps in the airport process where travelers should be mindful of their manners.

Stopping in the middle of a moving sidewalk is an etiquette no-no.

"If you want to stand, you and your luggage need to be in a straight line all the way to the right so that people can walk on the left," said Smith, adding that she generally encourages people to walk on moving sidewalks, rather than stand.

"Do not block these and impede other travelers' progress," she said. "At some airports, you're lugging yourself and your bags for what feels like miles between gates, so if you can save a couple steps, all the better. And if there are people coming, your children shouldn't be running backwards."

Odds are there will be many other people at your gate, so don't spread out and occupy more seats than you need.

"So many people take up not only the chair they're sitting in, but also one next to them with all their food and the other side with their bags," Smith explained. "If you're at an active gate, you're allowed to have one seat. If you want to spread out like that, look for an unused gate."

It's good to let your kids move about in the airport to tire them out before a flight. But that doesn't mean leaving them to their own devices.

"Pay attention to your surroundings. Look for an empty gate for your child to run about, not one that is filled with people," said Smith.

On the flip side, it's also rude to make a fuss about parents who are attending to their children but not able to calm them down.

"Avoid rolling your eyes at children who are tired from flight delays and don't have the ability to behave like an adult," Gottsman advised.

At the airport, it may be tempting to forget the difference between an actual issue and what's just part of the process.

"Go into this with the 'hurry up and wait' attitude," said Smith. "You may manage to get lucky and not encounter many lines, but you can presume that you're going to wait somewhere along the way. Don't be surprised and don't act annoyed and mutter under your breath just because you have to wait."

"When you're walking down the terminal to your gate, two abreast is the max," said Smith. "Five people in your party cannot walk in a line and block others from getting to their gate or exiting the airport."

Indeed, just because you have a long connection and can walk at a leisurely pace doesn't mean others are in that situation. You could be a speed block for someone on a tight connection racing to board their plane.

There's a term for airplane passengers who push ahead and clog the front of the boarding area long before their group is called: gate lice. Needless to say, etiquette experts consider this behavior to be rude.

"Wait for your group to be called before you line up," Gottsman said. "Avoid blocking the walkway with your luggage if it's not your turn to board." 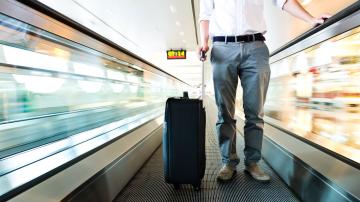