each year, co-created light artworks by local and international artists illuminate amsterdam’s city center during the amsterdam light festival. taking place from the 28th of november 2019 to the 19th of january 2020, the 8th edition called * disrupt! * has kicked off, inaugurating a new route with light artworks, unique stories about the city and collaborations with prominent amsterdam cultural institutions.

the amsterdam light festival 2019 saw 650 entries from which twenty established and up-and-coming artists from 16 countries were selected. the participant artists interpreted the * disrupt! * theme in different ways, with some installations acting as new interventions of the cityscape while others transformed the existing architecture of the city. during 53 days, the artworks can be admired daily from 5pm to 11pm and can be experienced by boat, bike, or foot along several routes.

some examples of disruption in nature include tom biddulph and barbara ryan’s * surface tension * which shows the disastrous consequences of global warming with minimalist lines of white light that contours the towed floating cars, traffic signs and lampposts. joining this piece is utskottet’s * atlantis * which sees an image of an international metropolis plagued by floods and other natural disasters.


hiding in the wolf’s lair by republic of amsterdam radio

movement is key to lambert kamp’s * order/disorder * 7-metre-high installation, where nine luminous circles continuously rotate in and out of each other. in contrast to this monochrome piece stands * remind euljiro freedom * , a colorful, flickering installation by EON SLD containing about 40 replicas of traditional signs, neon signs and light boxes that represent the 1950s to the present of a typical korean shopping street.

other artworks include * hiding in the wolfs lair * by republic of amsterdam radio & nomad tinker house, * end over end * by lucy mcdonnell from studio vertigo, and * feel like the kardashian’s * by laila azra among others.


all the light you see by alicia eggert 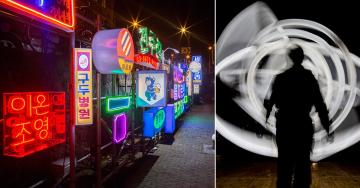